The sky is busy. The clouds race across using the stable blue for a sweeping canvas. So much to write. It roars and the wind carries it sounds. I am listening but I can’t make it out. The pines blow and wave and add to the shouts of the hemisphere. Listen out loud. A warning? Or a beckoning that life is ready to be lived in.

A day stuck in time. The trees claw at the sky. Give me the fruit of my arms so I can live again.

No portals today but smashed heavens one a top of the other knowing it is close and a good place to be. For those who have gone before us. To emulate its same rules and passions on this planet.  Thy will be done. On this earth as in the heavens.

The leaves dance on her asphalt path-guided floor. Skip. Every sound is a note, every note a word. Decoding the earth. I value her.

The sounds are coming from inside the portal – waste no time, He says. El Shaddai – He is the boss

This particular cloud portal moves. Like a giant hand – the earth like its own pod or time-castle. A lunar capsule to a new land. Where they come from it or we pass through. I am not sure.

With a rise (qum!) of suddenness, the pressure was gone and I could breathe. Gone, no more compression at all, and with immediacy. Only healed. Maybe it was physically and emotionally calming or both, but regardless the pain was no more and I could leap again.

To sustain my “miracle”, I discerned to continue to breathe deeply, meditate (working on this as a practice), be present to the condition, and take the supplement of turmeric – a miracle spice on so many different levels including brain health, mind clarity and a functioning heart…qum!

If more people understood they could pray for themselves, would we see more healings, more understanding of where to seek help, especially with the “right” words spoken over the need?

Aramaic words give me the control of peace. qum! Rise!

I was having heart palpitations…

Does true healing or emotional freedom require the right words with intentional presence? On this occasion I said them in Aramaic – an original language of God and the angels…

Take heart, my daughter, I am saying to you, rise!

The power of the Ask and the right words of prayer.

Let me explain – Most recently, after finishing the New York marathon last month, I have had some of my more irregular heartbeats, an occurrence that I have had for years even with an assuredly healthy heart. I tend to hold my breath when I am thinking about something, like I am on a plateau of a mesa in an Arizona spring, in a different realm of air, where I don’t think I need any, like I am okay in any depth of the ocean. But then suddenly I find myself without, and I realize I’m not breathing, but gasping, and an angry heart erupts.

Sometimes it’s intercession for someone, or flat out stress – The day of the marathon, for example, just before the race, I had a bad one. Now the stress of running a marathon, training, preparation, worry that you are ready, enough “goos” in my running belt?, have I had enough protein to endure, fear you won’t make it …, is an easy indicator that that was the cause. But the last one I had had while previously training was so beat against my chest that I had to stop running and almost crawl back to my house.

I know how to calm a heart. Breathing through it. Big gulps of what is given freely. Coaching myself.

A couple of weeks after the race, I was in hot yoga and had to leave the studio because of such an event. I suppose stress is a direct impact of influence on just how fast it flutters and how long it is, but then one day this past week, it felt as though someone was stomping across the sternum climbing up a hill, spikes in the snow.

In a study of miracles we are researching, I decided to employ one of the miracle patterns we have de-coded – the power of the Ask, the right words of prayer, how said, what prayer language, when, even the essence of the healing touch, trying to hear God on what to do about a hammering heart …

Go in peace, and be healed… He said.

I said those words over myself – a tap to my sternum, an Ask for healing, an affirmation in Aramaic that I was…. Itlabbabi brati amar-na qum!

A silhouette – a girl awakens; the woman free of old constraints; the relevancy of time to get there until the shadow fades. 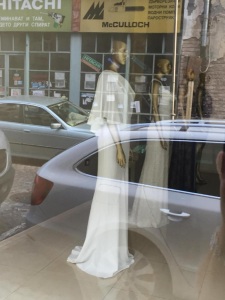